Many variables exist when a family is considering a club team.

To learn about how families decide which variables are the most important, we recently conducted an anonymous poll of our club users.

Read below to find out which factor they considered most important when deciding which club team to join.

Which of the following most accurately reflects why you chose your current club program? 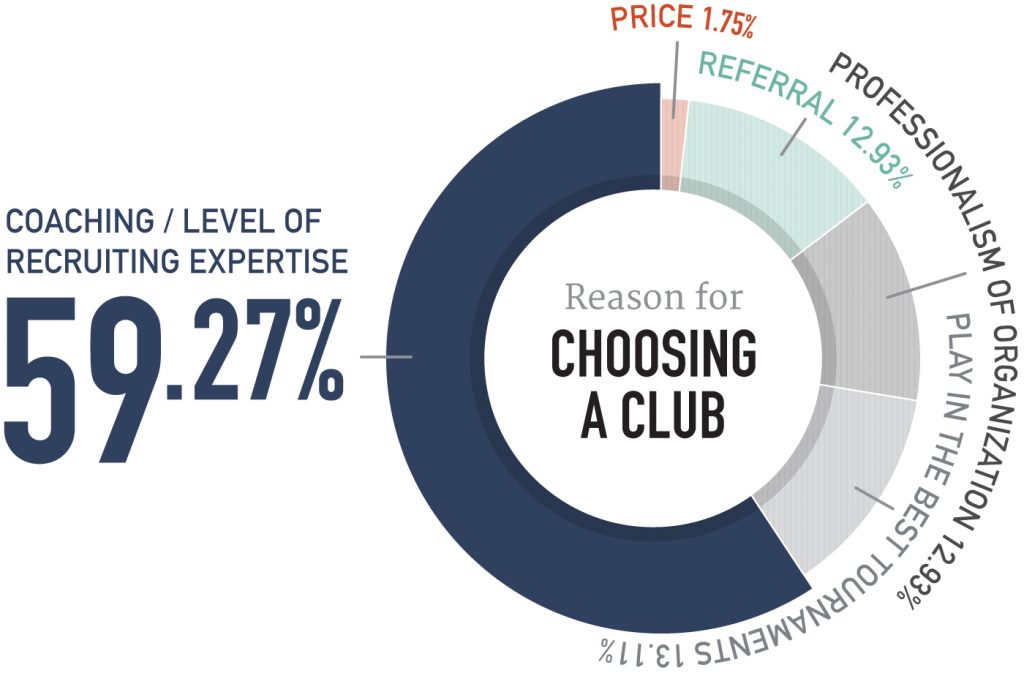 “It is all about college – getting into a better one.”

“[Redacted] is horrendous about recruiting unless you are one of the coach’s favorites or play for the high school team. They did not even help with my older son who now plays [in college]. [Redacted] is a cash machine for the owners. They hate parents. This is the primary reason why we switched [clubs].”

59.27% of respondents (339 of 572) noted that they chose their club team primarily for the coaching and level of recruiting expertise.

It is interesting to see a number behind what has been anecdotally true for many years: Families are relying on their clubs for guidance in the recruiting process. College will be the most significant investment a family makes outside of a house.

Looking at the respondents’ answers, we can see that negative feelings toward a club’s handling of the recruiting process can directly lead to them leaving an organization. This feels like a logical step when considering that over half of the families surveyed are choosing a club primarily for recruiting assistance.

Considering families are choosing clubs for their recruiting acumen, it is vital that organizations have a bulletproof system and/or the technology in place to handle these needs effectively.

Losing a family can be a real issue as an organization attempts to scale. As we know from our recent look at customer churn, it would be wise for clubs to continue doing everything in their power to keep their families happy.

The idea of customer churn – a fancy way of saying how many customers a business loses – is simply that an organization will be unable to grow if they are simply replacing customers as opposed to retaining them.

Depending on how many age groups a club supports, 85-90% of revenue organizations see each year comes from renewals, while only 10-15% are from new players. Thus, simply replacing families means losing the revenue that can be gained from keeping them on board.

We will revisit this question a bit later to explore another interesting trend in the answers provided.

Again, you can learn more about churn here.