For many high school lacrosse players, competing collegiately at a Division I program is seen as the end goal of countless summer tournaments, showcases and in-season games.

For many parents, the ability to tell others that their daughter (or son) plays at a Division I school is a source of great pride; the fruit of the money, time and effort put into getting their child onto this/i> club team or into that showcase.

Now, before continuing, let’s state the obvious: This train of thought certainly is not true of every player or parent out there. Many aspire to attend and play at an academically prestigious DIII institution, or follow a family legacy to a very competitive DII program. Others, still, look forward to competing in the MCLA at a school that offers their desired major or has that “bigger-school” feel.

Having said that, the instances of wanting that DI notoriety – especially for those new to the lacrosse recruiting process – are everywhere. And while not necessarily a bad thing, too often they fall beyond the realm of reality or self-awareness.

– As of Tuesday, March 24th, LaxPower.com listed 290 Division I commits in the Class of 2017. While this comes as no surprise given the accelerated recruiting timeline, it is still an eye-opening number to note that over 290 sophomores have already found Division I homes before many have played a varsity high school season.

– There are 107 programs fielding lacrosse teams this season at the Division I level. Per US Lacrosse, this number will jump to 111 next year, as four new programs will add a team (Central Michigan, Radford University, Army and Virginia Commonwealth).

– Depending on the year and the school, the number of recruits per DI institution generally ranges from eight to 10. For the sake of argument and easy calculation (there’s a reason I’m a writer), let’s say each school takes 10 recruits per year.

– According to the most recent US Lacrosse Participation Survey (2013), there were 120,951 girls high school lacrosse players in the country.

– Dividing this number by four gives over 30,000 girls lacrosse players per class year. Realistically, that number is probably lower, given attrition rates of players as they get older and discover new passions or concentrations. Again, for ease in calculation, let’s say there are 30,000 players per high school class year. These numbers are far from exact, but they are simply meant to illustrate a point.

Again, these numbers are a very rough estimate, and there exist countless variables that make them capricious in nature: Does every school actually take 10 recruits? Are all of those high school players even considering or skilled enough to play in college? What about the accelerated timeline, or desirability of each program? The list surely goes on.

However, the point is this: Based on numbers alone, it is very, very difficult to play lacrosse at the Division I level.

As a player, this does not mean you cannot compete with players going DI, nor does it mean you would not be successful at a DI school. The numbers are not meant to scare you away from wanting to play at the highest level – quite the opposite. They should serve as motivation if that is your goal. The point of being aware of these numbers is to ensure you are aware of the realities of the process so you can go into it with a plan.

You will probably know if you are a Division I level prospect. You will receive personalized attention from coaches and be invited to the upper-echelon camps. If you are not already committed to a school, September 1st of your junior year will see your inbox flooded with personal emails from coaches. Your club and high school coach will be fielding calls on your behalf. Basically: You will know.

As the recruiting timeline continues to accelerate, you will have a better idea earlier and earlier if you are a DI prospect. Keep working at it if that is your goal – but understand the realities of the recruiting space in 2015, fair or otherwise.

Personal Note: I played DIII lacrosse at Wesleyan University in the competitive NESCAC conference. I entered school in 2005, long before the days of club teams and showcase events every weekend. During the process, some bigger DI programs recruited me, and I have no doubt I could have stepped in and competed right away at those schools. For a variety of reasons, however, I chose the DIII experience. My decision had nothing to do with the thought if I was “good enough” to play at the highest level, but came down to a more personal choice based on many factors. I had an unbelievable experience, and am very happy I made the choice I did.

So, to the younger players out there: I urge you not to close your minds to experiences outside of the DI level, be it DII, DIII or club. For many, the DI experience is the best fit. But realize that despite what your friends may say, or the pressure you may feel from a variety of external sources, you should consider all of your options and make the best decision for you, realizing that you will most likely be going pro in something other than sports.

Lacrosse is an unbelievable sport, but realize it should be primarily used as a vehicle to get you to the best academic school possible to prepare you for life after college.

SportsRecruits, the Official Recruiting Service Provider of US Lacrosse, is an online platform proven to assist student-athletes in the recruiting process.

Players upload their personal, academic and athletic information, search schools, contact those schools and then track which programs are viewing their information – right from the profile.

The spring is a great time to ensure you are gathering film to prepare you for the crazy summer months. Call 212-414-8417 or email Help@SportsRecruits.com if you have questions about how to become a member. 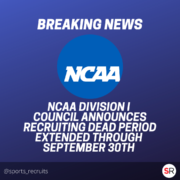